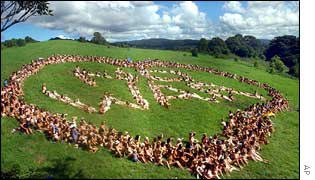 The UK intelligence dossier is as fake as Scott Ritter.

:
: Exclusive By Gary Jones And Alexandra Williams In Los Angeles
:
: JOURNALIST Sean Boyne and student Ibrahim al-Marashi have attacked Tony Blair for using their reports to call for war against Iraq.

:
: A journalist holds a copy of a dossier setting out British Prime Minister Tony Blair's case for military action against Iraq outside number 10 Downing Street in London, in this September 24, 2002 file photo. The government says it stands by the dossier, after academics said whole passages had been lifted from magazine articles, complete with spelling mistakes. REUTERS/ Dan Chung
:
: Mr Boyne, who works for military magazine Jane's Intelligence Review, said he was shocked his work had been used in the Government's dossier.

: Articles he wrote in 1997 were plagiarized for a 19-page intelligence document entitled Iraq: Its Infrastructure Of Concealment, Deception And Intimidation to add weight to the PM's warmongering.

: He said: "I don't like to think that anything I wrote has been used for an argument for war. I am concerned because I am against the war."

: The other main source was a thesis by post-graduate student, Ibrahim al-Marashi, the US-born son of Iraqis, who lives in California. His research was partly based on documents seized in the 1991 Gulf War.

: He said: "This is wholesale deception. How can the British public trust the Government if it is up to these sort of tricks? People will treat any other information they publish with a lot of skepticism from now on."

: After the dossier's origins were revealed, Mr Blair was accused by his own MPs of theft and lies. The fiasco has deeply damaged his attempts to win backing for military action.

: It emerged the PA to Mr Blair's spin chief Alastair Campbell was involved in drawing up the dossier which was published last month.

: Alison Blackshaw and a Government press officer were both named on the dossier when it was first put on the Government's website. But the names were later removed.

: The bulk of the Government's document is directly copied, without acknowledgement, from Ibrahim's 5,000-word thesis - Iraq's Security and Intelligence Network - published last September.

: He did not even know the dossier existed until Glen Rangwala, a Cambridge-based Iraq analyst, spotted the plagiarism and called him.

: Ibrahim, whose parents fled to the US from Iraq in 1968, said the Government not only blatantly lifted much of his work, including typing and grammatical errors. Mr al-Marashi and Mr Boyne said their figures had been altered in the Government document.

: Former Labour Defense Minister MP Peter Kilfoyle said: "It just adds to the general impression that what we have been treated to is a farrago of half-truths.

: "I am shocked that on such thin evidence that we should be trying to convince the British people that this is a war worth fighting."

: And Labour MP Glenda Jackson said: "It is another example of how the Government is attempting to mislead the country and Parliament.

: "And of course to mislead is a Parliamentary euphemism for lying."

: The PM's official spokesman rejected Ms Jackson's claims but admitted it had been a mistake not to acknowledge Mr al-Marashi's thesis in the dossier.

: He added: "The fact we used some of his work doesn't throw into question the accuracy of the document as a whole. This document is solid."

: Asked whether Downing Street was embarrassed about the affair, the spokesman said: "We all have lessons to learn."

: The dossier had been praised by US Secretary of State Colin Powell in his speech to the UN Security Council. Mr Boyne added: "Maybe I should invoice Colin Powell."

: by Rosemary Bennett and Elaine Monaghan
:
: DOWNING STREET’S embarrassment over its Iraq “intelligence” dossier deepened yesterday with the disclosure that key sections were cobbled together by junior communications unit staff, including Alastair Campbell’s secretary.

: Officials also admitted that chunks of the document — praised by Colin Powell on Wednesday for its “exquisite detail” — were copied word-for-word from an article by a 29-year-old Californian academic.

: The sentences were lifted from an article by Ibrahim al-Marishi, an Iraqi-American, in the September edition of Middle East Review of International Affairs. He, in turn, sourced his information to a 1999 book by the former weapons inspector Scott Ritter, who opposes President Bush’s Iraq policy.

: Last night the US State Department said that General Powell was aware of the reports. “The British report contained good information. We’ll leave it to them to talk about how it was put together,” a senior official told The Times.

: In London, the Prime Minister’s spokesman accepted that it may have been wiser properly to source the material used in the report and said the internet version might be amended to acknowledge its origins. “It was a pull-together of a variety of sources. In retrospect, we should, to clear up any confusion, have acknowledged which bits came from public sources and which bits came from other sources,” he said.

: He refused to say who had been responsible for the alleged plagiarism. However, four officials who worked on the report were accidentally named on an early draft. They include Alison Blackshaw, Mr Campbell’s personal assistant . Sources at No 10 privately admit that early in January, Mr Blair’s aides started to panic as it became clear the UN weapons inspectors were not close to finding a “smoking gun”, nor was there any sign that President Saddam Hussein was going to let the inspectors disarm him.

: The aides instructed communications staff to draw together evidence that Saddam was obstructing the officials to make that the central plank of their case against him instead.

: Along with material on how Iraq was frustrating the inspectors’ work, they included a section on how the Iraqi security services are structured, using information from Mr al-Marashi’s paper and Jane’s Intelligence Review. Mr Blair’s spokesman, attempting yesterday to preserve the authenticity of the remaining sections of the report, some of which were compiled by MI6, said that they had been based on intelligence reports.

: He also tried to distance senior aides, including Mr Campbell, from the plagiarised section, saying it had been merely “seen by the relevant people” before it went out.

: Labour MPs voiced anger that the Government’s case was built on such apparently flimsy ground.

: The former Defence Minister Peter Kilfoyle said: “It just adds to the general impression that what we have been treated to is a farrago of half-truths, assertions and over-the-top spin. I am afraid this is typical of the way in which the whole question of a potential war on Iraq is being treated.”

: In preparation for Powell's presentation at 15:30 GMT today, I had a look
: at the third British government's "dossier" released last Thursday, "Iraq -
: Its Infrastructure Of Concealment, Deception And Intimidation" (30 January
: 2003). The document is at:

: (references below to page numbers relate to the downloadable Word version).

: The document claims to draw "upon a number of sources, including
: intelligence material" (p.1, first sentence).

: Now this is a bit misleading.

: More precisely, the bulk of the 19-page document (pp.6-16) is directly
: copied without acknowledgement from an article in last September's Middle
: East Review of International Affairs entitled "Iraq's Security and
: Intelligence Network: A Guide and Analysis".

: The author of the piece is Ibrahim al-Marashi, a postgraduate student at
: the Monterey Institute of International Studies. He has confirmed to me
: that his permission was not sought; in fact, he didn't even know about the
: British document until I mentioned it to him.

: It's quite striking that even Marashi's typographical errors and anomolous
: uses of grammar are incorporated into the Downing Street document. For
: example, on p.13, the British dossier incorporates a misplaced comma:

: The other sources that are extensively plagiarised in the document are two
: authors from Jane's Intelligence Review:

: None of the sources are acknowledged, leading the reader to believe that
: the information is a result of direct investigative work, rather than
: simply copied from pre-existing internet sources.

: The fact that the texts of these three authors are copied directly results
: in a proliferation of different transliterations (eg different spellings of
: Ba'th, depending on which author is being copied).

: There are two types of changes incorporated into the British document.
: Firstly, numbers are increased or are rounded up. So, for example, the
: section on "Fedayeen Saddam" (pp.15-16) is directly copied from Boyne,
: almost word for word. The only substantive difference is that Boyne
: estimates the personnel of the organisation to be 18,000-40,000 (Gause
: similarly estimates 10-40,000). The British dossier instead writes "30,000
: to 40,000". A similar bumping up of figures occurs with the description of
: the Directorate of Military Intelligence.

: The second type of change in the British dossier is that it replaces
: particular words to make the claim sound stronger. So, for example, most of
: p.9 on the functions of the Mukhabarat is copied directly from Marashi's
: article, except that when Marashi writes of its role in:

: this becomes in the British dossier:

: "spying on foreign embassies in Iraq".

: Similarly, on that same page, whilst Marashi writes of the Mukhabarat:

: - the British dossier renders this as:

: Furher examples from the section on "Fedayeen Saddam" include how a
: reference to how, in Boyne's original text, its personnel are

: becomes in the British government's text a reference to how its personnel
: are:

: Clearly, a reference to the "country bumpkins" would not have the
: rhetorical effect that the British government was aiming for.

: Apart from the obvious criticism that the British government has
: plagiarised texts without acknowledgement, passing them off as the work of
: its intelligence services, there are two further serious problems. Firstly,
: it indicates that the UK at least really does not have any independent
: sources of information on Iraq's internal politics - they just draw upon
: publicly available data. Thus any further claims to information based on
: "intelligence data" must be treated with even more scepticism.

: Secondly, the information presented as being an accurate statement of the
: current state of Iraq's security organisations may not be anything of the
: sort. Marashi - the real and unwitting author of much of the document - has
: as his primary source the documents captured in 1991 for the Iraq Research
: and Documentation Project. His own focus is the activities of Iraq's
: intelligence agencies in Kuwait, Aug90-Jan91 - this is the subject of his
: thesis. As a result, the information presented as relevant to how Iraqi
: agencies are currently engaged with Unmovic is 12 years old.

: For reference, here are a few other summary comments on the British
: document.

: pp.2-5 are a repetition of Blix's comments to the Security Council on the
: difficulties they were encountering, with further claims about the
: activities of al-Mukhabarat. These are not backed up, eg the claim that car
: crashes are organised to prevent the speedy arrival of inspectors.

: p.6 is a simplified version of Marashi's diagram at:
: http://cns.miis.edu/research/iraq/pdfs/iraqint.pdf

: p.7 is copied (top) from Gause (on the Presidential Secretariat), and
: (middle and bottom) from Boyne (on the National Security Council).

: p.8 is entirely copied from Boyne (on the National Security Council).

: p.9 is copied from Marashi (on al-Mukhabarat), except for the final
: section, which is insubstantial.

: p.10 is entirely copied from Marashi (on General Security), except for the
: final section, which is insubstantial.

: p.11 is entirely copied from Marashi (on Special Security), except for the
: top section (on General Security), which is insubstantial.

: p.12 is entirely copied from Marashi (on Special Security).

: p.13 is copied from Gause (on Special Protection) and Marashi (Military
: Intelligence).

: p.14 is wrongly copied from Boyne (on Military Security) and from Marashi
: (on the Special Republican Guard).

: A final section, on the Tribal Chiefs' Bureau, seems to be copied from a
: different piece by Cordesman.