Bush: Time running out for Iraq 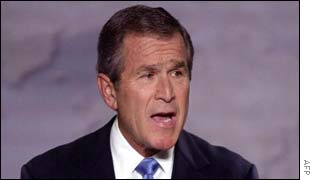 President George W Bush has said time is running out for Saddam Hussein and that he must disarm Iraq or face a coalition led by the United States.
His latest warning to the Iraqi leader came in a televised speech made in Cincinnati, Ohio, in the heartland of America.

Iraq's weapons of mass destruction are controlled by a murderous tyrant, who has already used chemical weapons to kill thousands of people

President Bush
"The time for denying, deceiving, and delaying has come to an end," Mr Bush said.

"Saddam Hussein must disarm himself - or, for the sake of peace, we will lead a coalition to disarm him."

In the speech Mr Bush laid out his case for military action saying that the threat from Iraq "only grows worse with time".

"Iraq's weapons of mass destruction are controlled by a murderous tyrant, who has already used chemical weapons to kill thousands of people," Mr Bush said.

He referred to the Iraqi leader as "a homicidal dictator addicted to weapons of mass destruction".

"Iraq could decide on any given day to provide a biological or chemical weapons to a terrorist group or individual terrorists," he added.


Thousands of Americans have protested against attacking Iraq

Mr Bush's speech also contained a message to Iraqi officials, warning them they could be tried for war crimes if they carry out "cruel and desperate" orders given by Saddam Hussein, in the event of conflict.

Correspondents says Mr Bush's speech is aimed at the US public and wavering American politicians.

US Congress is expected to pass a resolution authorising Mr Bush to use force, if necessary, against Iraq, and as mid-term elections approach.

The Republican-dominated House of Representatives has largely supported the strongly worded resolution Mr Bush is after, and is expected to vote this week.

The Democrat-controlled Senate, where Mr Bush's proposal has received a rougher ride, is expected to vote next week.

Mr Bush said that approving the resolution will not mean that military action is "imminent or unavoidable".


Where key nations stand on Iraq

A recent public opinion poll suggests that Americans are behind Mr Bush's tough stand on Iraq.

However, that support sinks when the issues of major US casualties, Iraqi civilian deaths or a lengthy war are raised.

Tens of thousands of people attended anti-war rallies across the United States on the eve of Mr Bush's speech.

An estimated 20,000 people who gathered in New York's Central Park on Sunday were joined by some Hollywood stars who spoke out against any future war.

Meanwhile, the US and Britain are trying to convince members of the UN Security Council to support a tough resolution that would threaten military force if Baghdad backed out of its pledge to allow arms inspections.

France, Russia and China - the other veto-wielding permanent members of the 15-state Security Council - have reacted negatively to the proposed resolution.