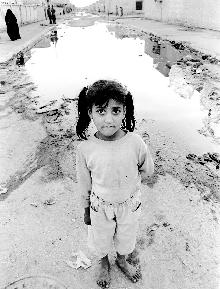 Iraq surveys show 'humanitarian emergency'
Wednesday, 12 August 1999: The first surveys since 1991 of child and maternal mortality in Iraq reveal that in the heavily-populated southern and central parts of the country, children under five are dying at more than twice the rate they were ten years ago. UNICEF Executive Director Carol Bellamy said the findings reveal an ongoing humanitarian emergency.

The surveys, released today by the children's agency, also cover the autonomous northern region of Iraq. They were carried out between February and May 1999 by UNICEF, together with the Government of Iraq in the southern and central parts of Iraq and with local authorities in the autonomous northern region of the country. Technical support for both surveys was provided by the World Health Organization (WHO). As a consequence of the findings, UNICEF recommended an immediate implementation of specific proposals made in United Nations Secretary-General's reports and by the Security Council's Humanitarian Review Panel. Among the specific proposals are the following:

Ms. Bellamy noted that if the substantial reduction in child mortality throughout Iraq during the 1980s had continued through the 1990s, there would have been half a million fewer deaths of children under-five in the country as a whole during the eight year period 1991 to 1998. As a partial explanation, she pointed to a March statement of the Security Council Panel on Humanitarian Issues which states: "Even if not all suffering in Iraq can be imputed to external factors, especially sanctions, the Iraqi people would not be undergoing such deprivations in the absence of the prolonged measures imposed by the Security Council and the effects of war."

UNICEF, as a member of the UN family, recognizes that economic sanctions are an instrument intended by the international community to promote peace and security, Ms. Bellamy added. "But our concern is that whenever sanctions are imposed they should be designed and implemented in such a way as to avoid a negative impact on children," she said. "Surveys on the situation of children and women are essential to the ongoing monitoring of the humanitarian situation there."

Ms. Bellamy also said that the surveys' findings cannot be easily dismissed as an effort by Iraq to mobilize opposition to UN sanctions.

"The large sample sizes -- nearly 24,000 households randomly selected from all governorates in the south and center of Iraq and 16,000 from the north -- helped to ensure that the margin of error for child mortality in both surveys was low," she noted. "Another important factor was the fact that, in the survey completed in the south and center of Iraq, all the interviewers were female and all were medical doctors. In the survey done in the northern autonomous region, fully 80 per cent of interviewers were female -- each team had at least one female interviewer - and all interviewers were trained health workers."

UNICEF was involved in all aspects of both surveys, from design to data analysis. The agency had full access to the hard copies of the interview records and the complete data sets for the surveys at all times.

"We are happy with the quality of these surveys. They have been thoroughly reviewed by a panel of independent experts and no major problems were found with either the results or the way the surveys were conducted," Ms. Bellamy stated.

UNICEF also said that a dramatic increase in bottle-feeding of infants has occurred in Iraq. Given the contribution of bottle-feeding to higher levels of malnutrition and child mortality, UNICEF is urging the Government to remove breastmilk substitutes from the rations and replace them with additional food for pregnant and lactating women. UNICEF has also called on the Government to promote exclusive breastfeeding of infants as a national policy.
In addition, the children's agency stressed the need for the full rehabilitation of Iraq's education sector, and urged a focusing on quality of education, infrastructure rehabilitation and planning for the future.

Among the report's additional findings in the south and central areas of Iraq: