Iraqi treasures to tour US 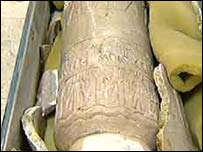 The Warca vase was returned to the Baghdad museum.

The Baghdad museum is lending some of its greatest treasures to the US, just months after fearing much of it had been looted.
The museum in the Iraqi capital was hit by a wave of looting in the days following the fall of Baghdad.

But after recovering much of what was thought to have been stolen, the Iraq museum is keen to show off its items of cultural importance.

Among the valuables which will form part of a travelling exhibition is the collection of Assyrian jewellery known as the Nimrud artefacts.

The priceless array of 650 bracelets, necklaces, royal tiaras and semi-precious stones is thought to be among the greatest archaeological finds of the 20th Century and dates from the 8th Century BC.

It was discovered in the tombs of Assyrian queens and princesses during excavation near the northern town of Mosul between 1988 and 1992.


It was among the pieces that were thought to have been lost during the looting but was later recovered from the Central Bank where it had been deposited in the 1990s.

A Sumerian Warca vase, dating from 3200 BC, will also be allowed out of the country.

The vase, which was discovered in 1940 in the town of Samawa, was one of the artefacts looted from the museum in April

The piece was then found by three men who handed it back to authorities, with the museum paying them "expenses".

"We are working on a travelling exhibition, which will be mounted for the first time in the United States within six to eight months," said Pietro Cordone, an Italian envoy charged with overseeing Iraq's cultural activities.

"Along with these pieces of extraordinary beauty, including bracelets with clasps that still work, the American public will also be shown the Warca vase, a unique piece made of alabaster dating back to 3200 BC which portrays scenes from everyday life."