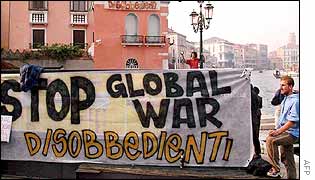 Venice saw protests, so did Rome, Milan and other cities


Thousands of anti-war demonstrators have been holding protest marches in various Italian cities.

In Venice, a group of about 100 student protesters briefly occupied the British Honorary Consul's office before handing in a letter opposing any conflict in Iraq to be forwarded to the British Government.


Protesters tried to chain themselves to the US embassy in Rome

!!!
The American authorities have advised their citizens living in Italy to avoid attending any street demonstrations which they warn might get out of hand.
!!!

But the protest marches held by students, pacifists, and anti-globalisation groups in Rome, Naples, Milan, Florence, and many other smaller cities all passed off peacefully.

The Italian left-wing is traditionally pacifist. Many student organisations joined in Saturday's demonstrations.

In Florence, the monks who live in the famous cloister of Santa Croce, rang their church bells in support of the demonstrators.

In Rome, a group of young women who tried to chain themselves to the railings in front of the American embassy, were prevented from doing so by police.

The governing centre-right coalition in Rome, led by Silvio Berlusconi, is being broadly supportive of President Bush's war on terrorism.

This week the Italian parliament authorised the sending of 1,000 Italian troops to Afghanistan to continue the hunt for al-Qaeda supporters.

But, in general, Italians are much less enthusiastic about the prospect of joining America and Britain in any joint military actions against Iraq, aimed at changing the regime there.